It Ends In Tears For Touts Who Harassed Woman

The Zimbabwe Republic Police have arrested four touts who were involved in the physical manhandling and harassment of a defenceless woman whose cries for help touched many in a video that went viral on social media recently.

The incident occurred at Dulibadzimu Rank in Beitbridge.

In a statement, Assistant Commissioner Nyathi warned bus operators to cease the practice of employing touts saying that their activities are illegal.

He also called on the public to report all incidents of harassment by touts, saying that people should take special care to note the name of the bus company involved.

The assistant commissioner warned that the police are going after touts and have intensified operations at bus termini and ranks across the country.

Below is the statement from Assistant Commissioner Paul Nyathi which iHarare is publishing in its entirety below:

The Zimbabwe Republic Police has arrested the four touts who were involved in the physical manhandling and harassment of a woman in a video which went viral recently.

The incident occurred at Dulibadzimu Rank, Beitbridge. The touts will appear in court today, 31 March 2021.

The Police applauds all Zimbabweans for the co-operation and concern over the conduct of the touts.

The public is urged to report all incidents of harassment by touts taking note of the location, date, time and the name of the bus company involved.

The Police would like to warn bus operators against employing touts as the law does not recognize their activities.

Passengers have a right to board public service vehicles of their own choice without being manhandled or forced to board a particular bus or kombi against their will. 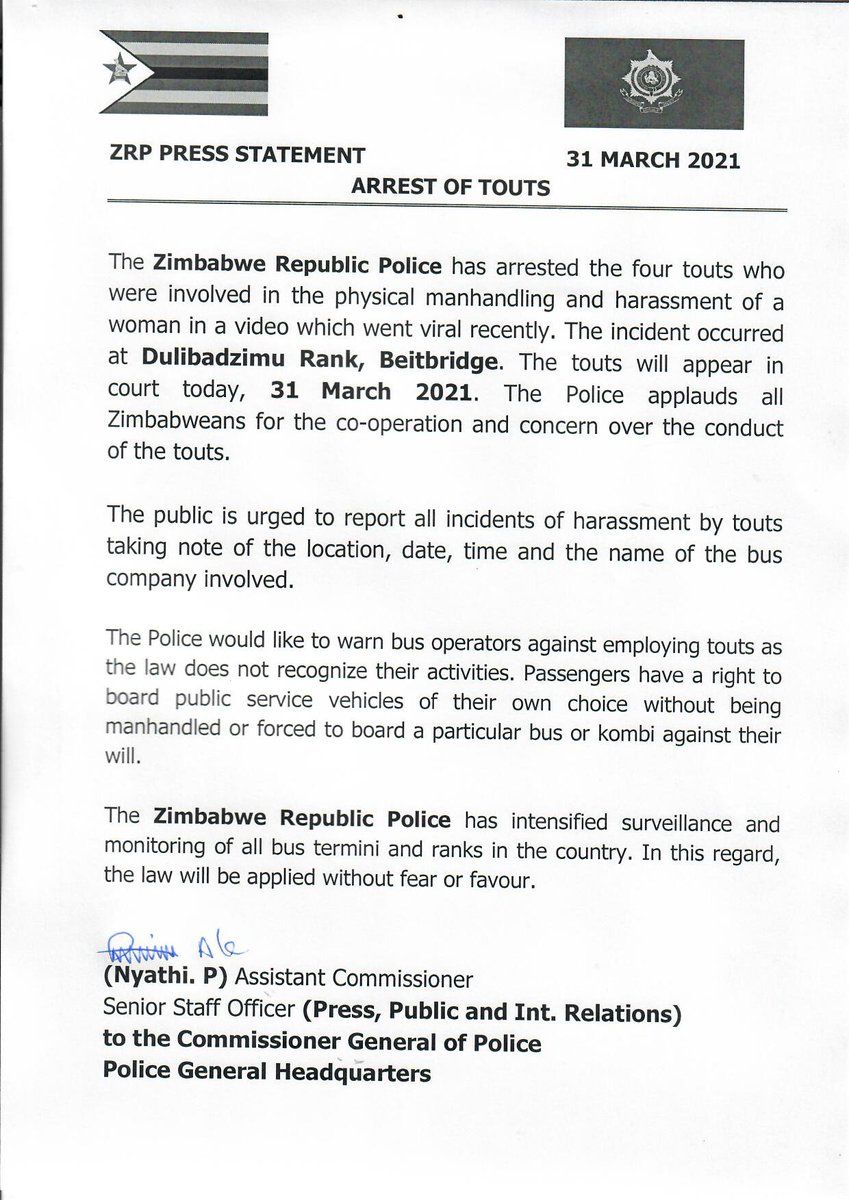 The Zimbabwe Republic Police has intensified surveillance and monitoring of all bus termini and ranks in the country. In this regard, the law will be applied without fear or favour.

In other news, Zodwa Mkandla demanding that a Bentley Continental GT hidden in South Africa be surrendered.

The car is believed to be under the custody of Ginimbi’s long-time friend, Nomatter Zinyengere in South Africa and Zodwa wants it registered with the Master of High Court as required in terms of the Administration of Estates Act and surrendered to the Executor.

Zodwa bought the car from the UK in 2013, while Ginimbi paid for duty in Zimbabwe…Learn More