State-run paper, The Herald, was forced to retract an article which claimed that the late former Minister of Foreign Affairs, retired Lieutenant-General Sibusiso Moyo, was part of the Zipra High Command.

The article sparked controversy with former Zipra commanders and critics pointing out that the claims were misleading as he was nowhere near there. An anonymous former ZIPRA commander said:

When we returned from the war in 1980, SB was young (19), couldn’t be in Zipra High Command. Even Elson Moyo (the current Airforce commander) wasn’t there. Elson’s brother (SB’s cousin); Zvafa was head of signals, but he died so Tshinga bounced back.

The truth is that at the Zipra High Command we didn’t even know SB, he was too junior at instructor level. We knew his cousin brother Zvafa, who was the brother to Elson Moyo, current Airforce commander. Guys like PV Sibanda, who are senior, were there at deputy command level.

The Herald was then forced to apologise for the misleading claims. Posting on Twitter, the publication said:

On our front page infographic in yesterday’s issue, we erroneously stated that the late Foreign Affairs and International Trade Minister, Lieutenant-General (Retired) Dr Sibusiso Moyo, was a member of the High Command during the liberation war.

We have established that this is not coincorrectish to apologise for any inconvenience this may have caused. 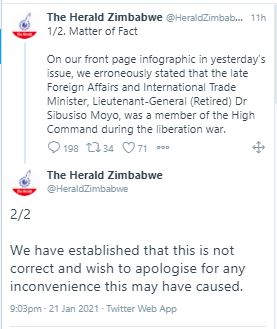 ZIPRA had the structures indicated in the following diagram by Chitiyo and Rupiya (2005: 334)

Prior to that in Zipra High Command, there was also Akim Ndlovu, Alfred Nikita Mangena, Robson Manyika and Ambrose Mutinhiri, among others.

MDC Alliance Is Our Name, We Won’t Abandon It – Hwende