Just over half a billion (533 million) Facebook users’ personal data was leaked online.

According to a report by Business Insider, the exposed data includes phone numbers, Facebook IDs, names, dates of birth, bios and in some cases even email addresses.

The leaked data exposed Facebook users from 106 countries with the United States accounting for 32 million, the UK 11 million and 6 million users from India.

When asked about this breach, Facebook said that the data was harvested because of a vulnerability that was patched in 2019.

However old the information is, it is still pretty valuable to cybercriminals who can use the data to impersonate those exposed or trick them into handing over their current credentials according to the CTO of Hudson Rock Alon Gal (the firm that discovered the leak). 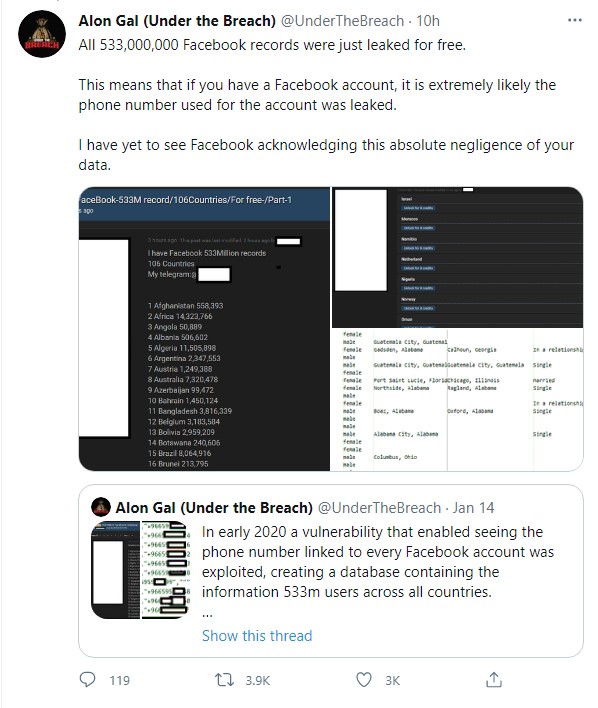 As you can see from the image above, Alon Gal reported the leak in January when someone on a hacking forum was advertising a bot that could generate the phone numbers of millions of Facebook users for a fee.

Now the data of all 533 million Facebook users is available on this forum for free.

In other news, Drama At Graveyard…Father Demands 8 Beasts!

Relatives of the 22-year-old woman who died after being assaulted by her husband demanded eight beasts at the grave site.

Prior to the burial, Chiveto paid part of the lobola. A source who attended the burial said: “There was drama at the graveyard: Hama Dzemurume Dzikazopfugama Kukumbira Ruregerero…Learn More