The President of Botswana, Mokgweetsi Masisi has condemned the abuse of citizens by police officers who are enforcing that country’s lockdown.

Masisi assured the victims that liable officers will be held accountable and will be punished.

Below is a statement that was released by Masisi’s office following the alleged abuse.

The Office of the President has noted with great concern, pictures of two people circulating on social media that have allegedly been assaulted by the police.

The matter has been brought to the attention of His Excellency, Dr Mokgweetsi Eric Keabetswe Masisi, President of the Republic of Botswana and the Minister of Defence, Justice and Security Honourable Kagiso Mmusi.

The victims are a 22-year-old woman, Neo Dikgole and her brother, 18-year-old Thuso Sebinyane of Lotlhakane near Lobatse.

His Excellency has been in touch with Dikgole and their mother Tebogo Sebinyane and has given the assurance that this conduct does not represent the country’s law enforcement agencies as well as his government.

He also gave them the full assurance that once investigations are complete the agents responsible will face stern action as well as administrative sanctions.

The Police Commissioner has been instructed to investigate this as a matter of urgency and has already dispatched a team to investigate.

The President wishes to once again assure the nation that his government shall continue to uphold the rule of law and respect for human rights and those who violate them will face the full might of the law. 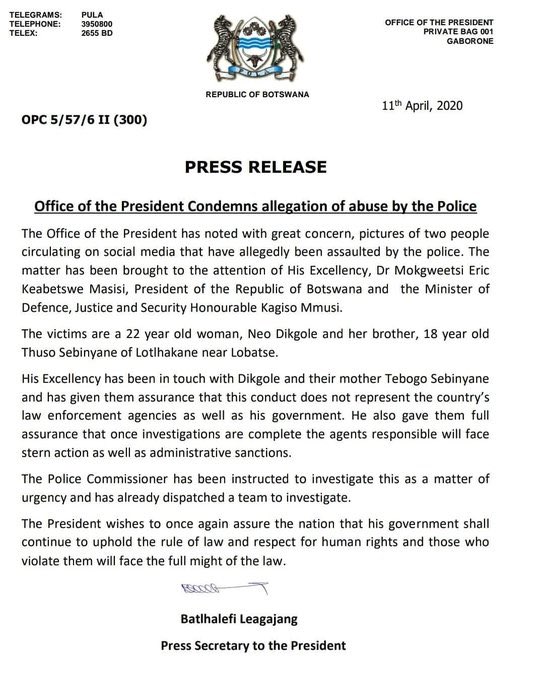 Zim waiting for SADC decision to intervene in Mozambique